Studies in America about penis size

Chile: A study shows an average size of 5.51” in erection (Researcher: Clínica Andromex)

Brazil: In 1994 Da Ros in Brazil performed a study amongst 150 men and obtained an average size of the penis of 5.7”. the subjects were healthy Caucasian males satisfied with the length of their penis.

U.S.A.: Condoms manufacturer Durex revealed that the average is 6.29”, while a study from the University of California lowered this figure to only 5.11”. Durex study covered a population of 2936 men (most of them younger than 25) who filled in a form through internet without revealing their identity. Apart from the length, the average in girth obtained through this study was of 5.23”

The study also investigated the perception men had in relation to the size of the condoms. 35% felt they are very tight and 15% felt they are very loose. Those who have a bigger penis than the average tend to declare they have suffered the breaking of a condom at least once.

In the Kinsey Study from 1948 (afterwards analysed by Jamison and Gebhard in 1988) done amongst 2770 men, resulted in an average of 3.81” in flaccidity and 6.1” in erection. This study is not to be trusted completey, since every man reported its own measurements.

According to the study doen in 1980 by Lee and Cols, the average length of the penis of an adult (stretching the penis in flaccidity) varies between 4.72” and 5.51”. This technique offers approximately an idea (correlation of 0’84) of the length in erection. 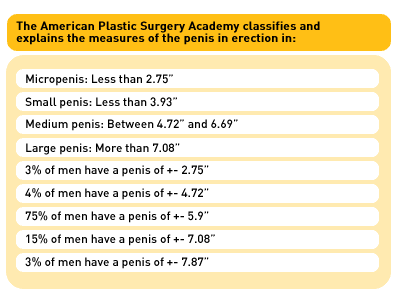 The smallest penis reported to date had a length of 0.48 inches. On the other hand there have also been reports of penises measuring up to 13.97” long. However, these measures are very rare. Kinsey, renowned author of the homonimous study, maintained that the myths concerning the penis measures of the black male are highly exaggerated.

A reference in Europe about penis size

Spain: The Spanish Andrology Society stated in 2001 that the average length of the penis in erection in Spanish males is of 5.34” and the girth 4.42” (diameter of 1.5”). According to these figures, a penis is to be considered a micro penis when it measures less than 3.54” in erection.

Germany: One of the oldest references in this field is the stdy performed by Loeb, in 1899. However, it only shows the length in flaccidity in 50 men, the average being 3.74”.